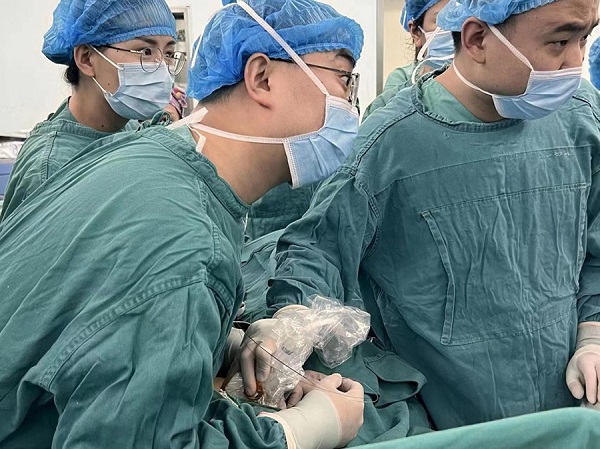 The Chongqing Health Center for Women and Children successfully performed heart surgery on a fetus with severe heart malformation two months ago. [Photo provided to chinadaily.com.cn]

A healthy baby was born on Oct 10 after undergoing heart surgery in the mother's womb two months ago by the Chongqing Health Center for Women and Children.

It was the first surgery — known as percutaneous balloon pulmonary valvuloplasty, or PBPV — to be performed on a fetus in western China, the hospital said.

Earlier this year, the pregnant mother had gone to the hospital for an ultrasound examination. The baby was found to have serious heart defects, according to Chen Gongli, director of the fetal medicine department of the center at Chongqing Medical University.

The diagnosis was severe pulmonary stenosis, or PS, which had affected development of the baby's right heart chambers, and it was likely to be born with single ventricle. The experts suggested prenatal heart surgery, as surgery after birth would likely find the baby in worse condition and result in a poor long-term prognosis.

Chen said he and his group waited for an opportunity to perform the surgery, which came two months ago, when the fetus's position in the mother's body was suitable. The operation took around two hours.