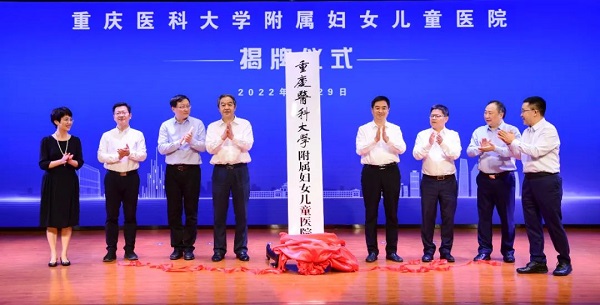 The Women and Children's Hospital of Chongqing Medical University is officially launched on April 29. [Photo/CQHCWC]

The signing ceremony was attended by officials from the Chongqing Municipal Health Commission, Chongqing Medical University and CQHCWC, and was hailed by various academicians, officials, and experts on women’s and children's healthcare.

Huang Minghui, Party secretary and director of the Chongqing Municipal Health Commission, said at the signing ceremony that the cooperation marks the launch of Chongqing's first municipal grade-A tertiary hospital for women and children.

The health commission has achieved great success in promoting women’s and children's health with its full-life cycle service for women selected as a model case by the National Health Commission and promoted across the country.

Under the service, Chongqing's maternal mortality rate and infant mortality rate have continued decreasing and are currently lower than the national average and the lowest in West China.

Huang hopes that CQHCWC and Chongqing Medical University will learn from others' strengths to offset their weaknesses, integrate resources, and construct a hospital with high-quality disciplines and work teams to improve women’s and children's health in Chongqing.

Liu Yanbing, Party secretary of Chongqing Medical University, said at the signing ceremony that the university is devoted to the training of first-class talent and the construction of first-class affiliated hospitals.

The partnership is expected to help Chongqing cooperate with national medical centers, contribute to the development of the Chengdu-Chongqing economic circle, and optimize the allocation and development of Chongqing's educational and medical resources, Liu said.

He added that the university will give full play to its advantages in talent cultivation, discipline development, scientific research, sci-tech achievement commercialization, and international cooperation to work with CQHCWC in medical education, clinical medicine and scientific research.