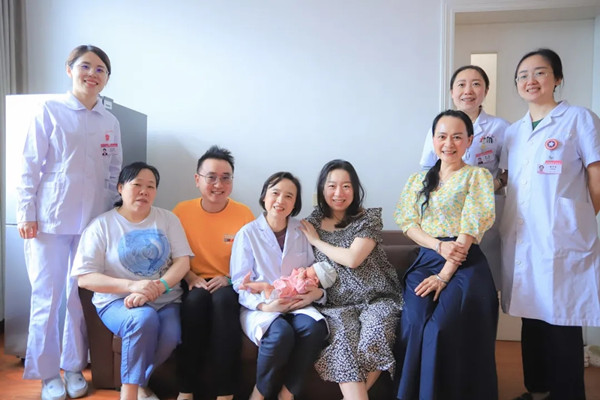 Dan Yang (fourth from left) poses for a group photo with the family of Yaoyao. [Photo/CQHCWC]

Dan Yang, vice-president of Chongqing Health Center for Women and Children (CQHCWC), recently received an old photo showing her with an infant she'd delivered named Yaoyao, who was born at CQHCWC 28 years ago.

On June 3 this year, Yaoyao gave birth to a baby at CQHCWC and her family was able to share the moving moment with Dan Yang.

It is an honor for an obstetrician or gynecologist to see a baby they have delivered become a mother, said Dan.

It is a rare opportunity and an inheritance of the spirit of CQHCWC, she added.

Dan started her work at CQHCWC in April 1989 and has been working at the hospital for more than three decades. She has committed herself to women and children's health – just like all of CQHCWC's dedicated medical staffers.