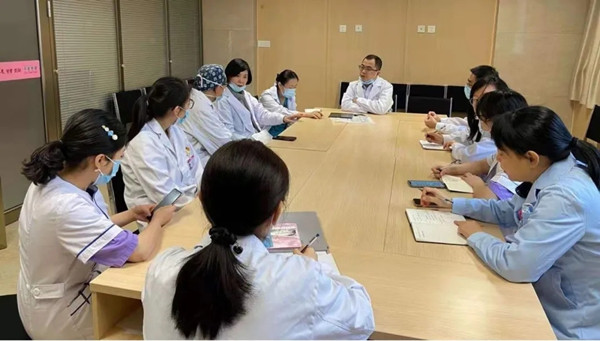 A fetus with high-risk congenital high airway obstruction syndrome (CHAOS) was successfully born at Chongqing Health Center for Women and Children (CQHCWC) on May 16, following collaboration between medical workers from various departments.

CHAOS is a disease with an almost 100 percent mortality rate, according to statistics.

A blockage in the airway is one of the core reasons for its high fatality rate. It leads to badly impaired respiratory function and a failure to cry after birth, according to Chen Gongli, director of the Perinatal Surgical Department of CQHCWC.

After multi-disciplinary team (MDT) collaboration, a detailed diagnosis and treatment plan was formulated, including a procedure called Fetoscopic Laser Ablation for CHAOS. The operation, literally performed through the mother's belly into the mouth of the fetus, is highly difficult and so far there have been no successful cases in China or even in Asia.

Physicians from the perinatal surgical department successfully carried out Fetoscopic Laser Ablation when the fetus was 31+2 weeks, allowing lung water to fully flow out and thus protecting lung function.

The next step was to carry out ex utero intrapartum treatment (EXIT) to build an airway during delivery.

Born 2.15 kilograms, the baby has been detached from the respirator and is breathing smoothly.

Medical workers from CQHCWC carry out an intrauterine surgery for a fetus with high-risk CHAOS. [Photo/CQHCWC]