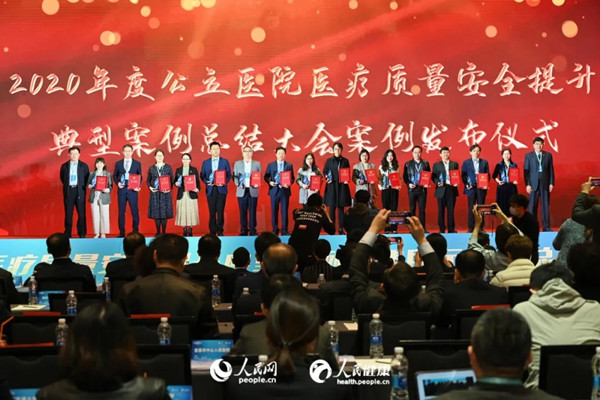 An award ceremony for typical examples of medical quality and safety improvement is held in Wuhan on March 27. [Photo/CQHCWC]

The selection of typical examples of medical quality and safety improvement in public hospitals in 2020 was recently announced, following a preliminary online review and a final on-site evaluation by experts. Two candidates submitted by Chongqing Health Center for Women and Children (CQHCWC) were among the award winners.

Jointly launched by the medical administration bureau of the National Health Commission of the People's Republic of China (formerly the National Health and Family Planning Commission) and health.people.cn, the selection held a commendation conference on March 27 in Wuhan, the capital city of Central China's Hubei province.

Zhang Hua, president of CQHCWC, attended the conference and received the awards.

The typical team, Perinatal Medical Center of CQHCWC, was formally established in 2018 and introduced high-level foreign experts such as German professor Gerhard Jorch. It is the first physical perinatal medical center in West China. The lowest-weight infant it has treated was only 660 grams, while the minimum gestational age of a premature infant was 25+3 weeks.

The center is a leader in the treatment of critically ill pregnant women and newborns in the city.

The typical individual, Liu Lubin, is currently the director of the Gynecological Pelvic Floor and Oncology Department of CQHCWC. He led the establishment of the department, which is the first clinical department in Southwest China to diagnose and treat female pelvic floor dysfunction diseases and gynecological tumor diseases. The department has obtained more than 10 related national invention patents.

The selection offered a platform for mutual learning and communication with other hospitals and demonstrated CQHCWC's achievements in medical service quality improvement.