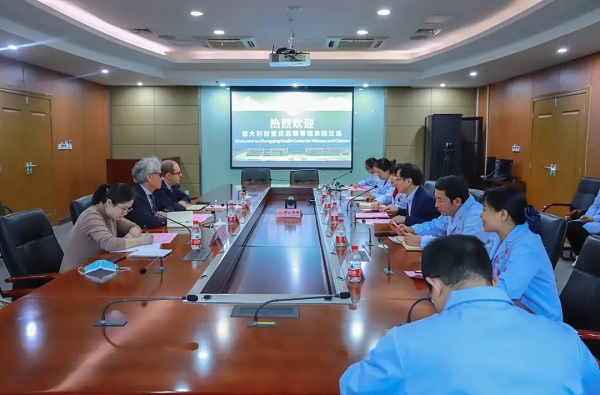 Members of the delegation from the Consulate General of Italy in Chongqing (left) communicate with CQHCWC representatives on Nov 30. [Photo/CQHCWC]

A delegation from the Consulate General of Italy in Chongqing visited Chongqing Health Center for Women and Children (CQHCWC) on Nov 30 to explore cooperation opportunities between the Giannina Gaslini Institute of Italy and CQHCWC, and strengthen the healthcare exchanges between China and Italy.

The delegation, composed of Lorenzo Gonzo – counselor for scientific and technological affairs, Zhang Lu – commissioner from the commercial counselor's office, and Andrea Sorgato – a representative from the Giannina Gaslini Institute, had a meeting with CQHCWC representatives.

On behalf of the hospital, CQHCWC President Zhang Hua extended a warm welcome to the guests and briefly introduced the hospital's general information, featured departments, and international exchanges and cooperation affairs.

After that, the delegation visited the Neonatal Department and exchanged views on the diagnosis, treatment and nursing of newborns with CQHCWC medics.

Andrea Sorgato said that the two hospitals share common pediatric diagnosis and treatment features and expressed his hopes for exchanges and cooperation between the two sides in the future.

The year 2020 is the 50th anniversary of the establishment of diplomatic relations between China and Italy. This visit has further enhanced the friendship between the two nations and promoted the development of the two countries' medical and health undertakings.

The Italian delegation's visit has also opened the door to future exchanges and cooperation between the two countries' hospitals. 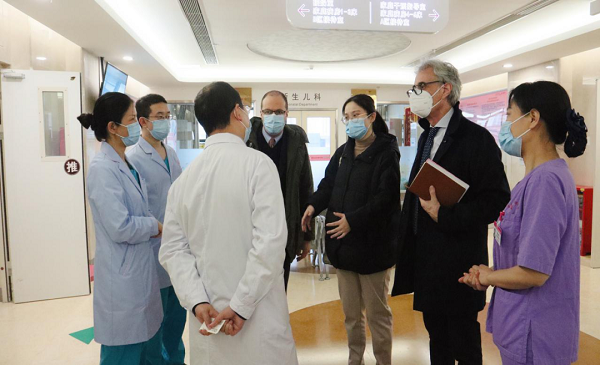 Members of the delegation chat with CQHCWC medics on Nov 30. [Photo/CQHCWC]