The pregnant woman whose fetus was treated hails from Longnan, in Northwest China's Gansu province, where local doctors stated that there was very little hope that the fetus would be viable.

The growth on the fetal lung pushed on its heart, resulting in heart failure known as hydrops, which has symptoms of ascites (fluid in the abdomen) and edema (extra fluid) of the skin and scalp.

Due to the extremely poor condition of the fetus, Doctor Chen and his colleagues conducted a radiofrequency ablation (RFA) procedure on it to block the tumor's main blood supply. They also undertook suction drainage of the cystic fluid in the larger cyst cavity. 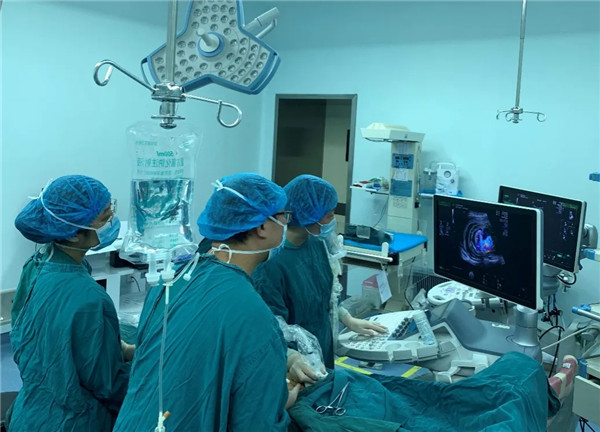 Chen and his team from CQHCWC's Perinatal Surgery Department perform the RFA procedure on the fetus on Oct 11. [Photo/WeChat account of CQHCWC]

The treatment for CCAM in China is still based on postnatal surgical resection. There are few reports of intrauterine intervention to improve the fetal prognosis for large CCAM.

RFA treatment is guided by fetoscopy or ultrasound to locate the tumor blood vessels. Next, the blood vessels are coagulated using radiofrequency to reduce the tumor's blood supply and make it shrink or stop growing. The goal is to alleviate the compressive effect of the mass, lessen the fetal heart burden, eliminate fetal edema and ultimately improve the fetal prognosis and save the fetus.

This therapy is applicable for fetuses with large CCAM, pulmonary sequestration and chorioangioma, among other diagnoses.