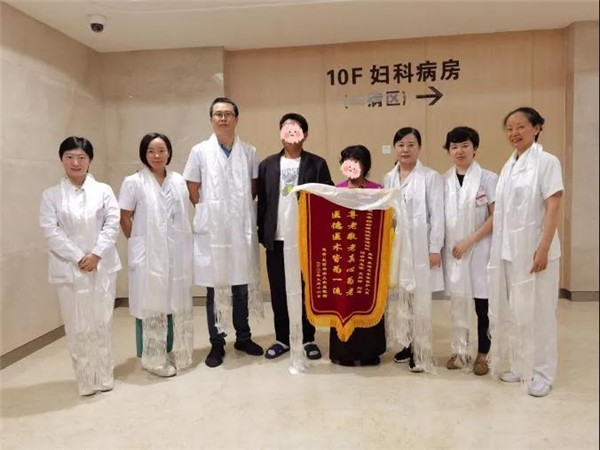 The Tibetan woman (fourth from right) who has been saved by CQHCWC presents hadas and a silk banner to medics. [Photo/WeChat account of CQHCWC]

A Tibetan woman and her family from Tibet autonomous region recently presented "hadas" – a kind of white silk scarf representing goodwill and purity in ethnic Tibetan areas – and a special silk banner to the medical workers at Chongqing Health Center for Women and Children (CQHCWC). The gesture was to thank them for curing a disease that had caused her significant discomfort over several years.

On Aug 26, the woman was admitted to CQHCWC's Gynecology Department. For the past three years, she had suffered from irregular vaginal bleeding, dizziness, abdominal pain and other symptoms. She repeatedly visited local hospitals for treatment but remained undiagnosed and saw no improvement.

Her unpleasant situation received professional attention on Aug 18 when she was transferred to Chamdo People's Hospital in Tibet autonomous region and met Liang Bixiu, a general gynecologist from CQHCWC assisting local Tibetan doctors.

Liang received her as a patient and discovered that her hemoglobin was only 29 grams per liter. A pelvic magnetic resonance examination suggested that the woman might be suffering from pelvic malignancy tumor. Given the limited medical resources at the local hospital, Liang contacted CQHCWC for a referral immediately after the woman received symptomatic treatment, including an emergency blood transfusion.

Due to the language barrier, the woman's hospital admission assessment and daily communication greatly hindered further treatment. Thankfully, the review and additional visits were facilitated with the help of Liang and a mobile app.

Because the woman had been suffering for three years and had lesions and severe anemia, medical workers considered the possibility she had endometrial cancer or cervical cancer. To address the patient's unique condition, CQHCWC organized medics from all departments to discuss and formulate a detailed and standardized diagnosis and treatment plan, including a diagnostic curettage and anemia treatment.

Chi Yugang, deputy director of the Gynecology Department, had a clear and precise communication with the patient and her family using hand gestures and a mobile app, allowing them to get a clear and detailed understanding of the patient's condition and the treatment plan.

Post-operation, the patient was unable to order meals due to her inability to speak Mandarin Chinese. Luckily, a nurse at CQHCWC was able to take charge of the ordering service so that she received three meals per day that met her dietary requirements and medical condition.

Under the CQHCWC medical team's intensive care, the frail patient recovered faster than expected without any post-operation complications.

On Sept 16, Chi learned that the patient's financial situation was terrible, so he organized a fund-raising activity calling on Party members and medical personnel to help support the patient. Chi also helped her apply to exempt all of her hospitalization expenses.