After 93 days of intensive effort and treatment, a premature boy who has grown to 1,900 grams from 830 grams at birth, was recently discharged from the Chongqing Health Center for Women and Children (CQHCWC). 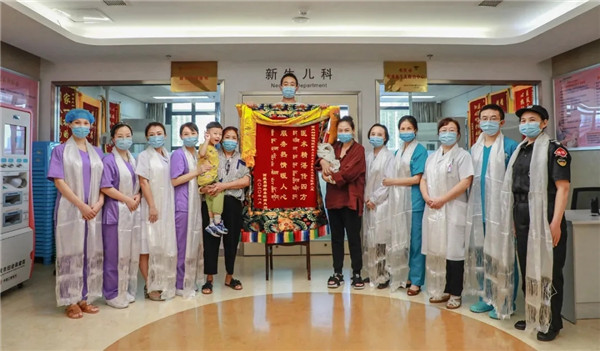 Kelsang (6th from right) and her family pose for a photo with the medical team that helped save her baby before being discharged from the Chongqing Health Center for Women and Children. [Photo/WeChat account of CQHCWC]

Kelsang, a 30-year-old woman who lives in Chamdo, Southwest China's Tibet autonomous region, began experiencing worrying pregnancy compilations mainly caused by cervical incompetence on May 12, during her 23rd week of gestation. She was concerned that her unborn baby might arrive prematurely, or that the fetus might not make it as she suffered a miscarriage for the same reason two years ago.

Accompanied by her husband, she traveled more than 1,300 kilometers by plane and was admitted to CQHCWC on May 14.

An emergency team consisting of experts from various departments – including neonatology, critical care medicine, anesthesiology, ultrasound and radiology – worked out a detailed plan to prevent a miscarriage.

On May 31, the first day of her 26th week of pregnancy, Kelsang showed abnormal indicators, and the hospital's Prenatal Medical Center convened a rescue team to devise a new treatment plan.

Three days later, Kelsang went into labor. A team led by Zhong Xiaoyun, a leading specialist in neonatology in China and director of CQHCWC's Neonatology Department, stood by for her delivery. The temperature in the delivery room and the waiting room was preset to 30℃.

A shuttle incubator – otherwise known as a mobile neonatal intensive care unit (NICU) – and items for thermal insulation were prepared for the baby's arrival.

At 2:55 pm, Kelsang delivered the baby via cesarean section with the joint effort of multiple medical departments.

After nearly 40 minutes of resuscitation work, the newborn was transferred to the NICU by the shuttle incubator with the support of a nasal noninvasive ventilator.

The NICU doctors conducted umbilical vein catheterization (UVC) and a peripherally inserted central catheter (PICC) line insertion on the baby, which helped supply nutrition and medicine. The baby was fed donated breast milk four hours after birth and was breast-fed by the mother a day later. 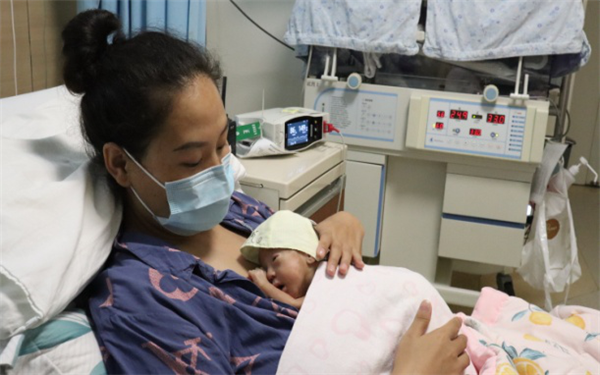 The NICU allows Kelsang to give kangaroo mother care, a method of care for the preterm infant with skin-to-skin contact. [Photo/WeChat account of CQHCWC]

Thanks to the nursing services in the NICU, the baby was removed from the oxygen inhalation apparatus and transferred to a standard family-style ward 63 days after birth.

The measures taken to support the infant's respiration before, during and after delivery meant that the baby only had to use a pulmonary surfactant once and receive noninvasive respiratory support after three days of invasive mechanical ventilation. It in turn greatly reduced the adverse effect of invasive procedures as no serious complications ever occurred during the infant's hospitalization.

Kelsang said she named the baby "Qing Er" as a way to thank CQHCWC for "giving him a second life".

The case demonstrated the technical strengths and teamwork of the hospital's perinatal medical center, which has gained advanced management experience and built a skilled team. The center offered strong technical support to help the premature baby survive.

The "intrauterine transport" mode guarantees the safety of critically ill pregnant women and newborns around Chongqing and the country at large, ensuring that preterm infants get safer, more efficient and faster treatment.