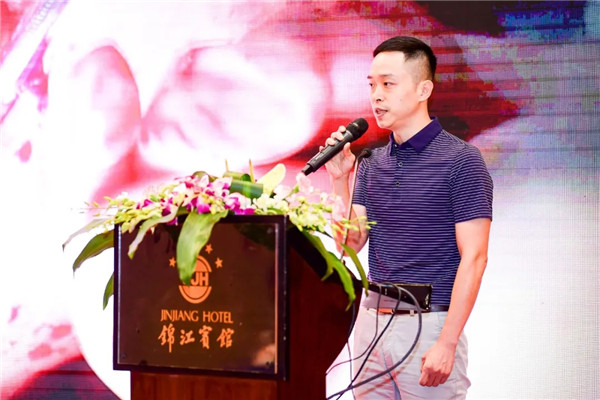 Chen Jun, from the Obstetrics Department of the CQHCWC, gives his presentation at the finals in Chengdu on Aug 27. [Photo/WeChat account of CQHCWC]

Chen Jun, deputy chief physician from the Obstetrics Department of the Chongqing Health Center for Women and Children (CQHCWC), won top prize at the regional finals of a prestigious competition held on Aug 27 in Chengdu, capital city of Southwest China's Sichuan province.

Chen triumphed in the finals of the Southwest China division at the first national obstetric surgical procedures and surgery sutures skills competition.

The competition was held by the Chinese Society of Perinatal Medicine under the Chinese Medical Association and launched in April with three sections for an online tryout, area finals and regional grand finals.

There were more than 1,900 contest videos submitted online in eight competition divisions in China, including nearly 700 in Southwest China division.

After an online contest among more than 600 contenders, Chen initially won second prize in the final of Chongqing area competition on July 11, taking him through to the finals of the Southwest China division.

In that event, Chen competed with eight opponents in the Southwest China region and won first prize with his excellent surgical and operational skills.

The CQHCWC medical staff members demonstrated their dedication, precision and exquisite surgical skills at this national competition. This event also helps further standardize the operation of cesarean section, improve the skills of cesarean section surgery and reduce the incidence of obstetric complications.