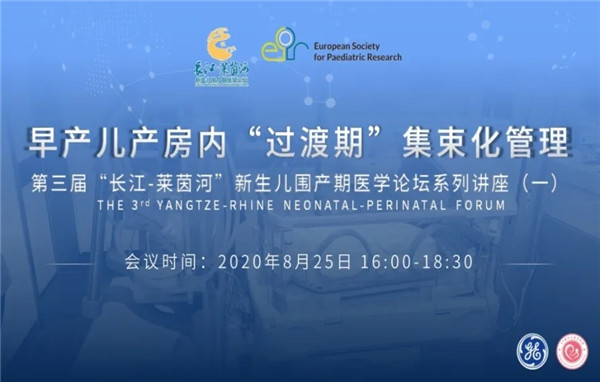 The poster promoting the online conference of the Third Yangtze-Rhine Neonatal-Perinatal Forum. [Photo/WeChat account of CQHCWC]

The first online conference for the Third Yangtze-Rhine Neonatal-Perinatal Forum -- held by the Chongqing Health Center for Women and Children (CQHCWC) in Southwest China's Chongqing -- took place on Aug 25.

The conference attracted the participation of over 2,000 medical workers from obstetric and neonatal departments at 850 medical institutions in China.

At the conference, Zhong Xiaoyun, director of the CQHCWC's Neonatal Department, shared the invaluable experiences accumulated in the clinical work, videos and series of achievements made in the construction of the Perinatal Medical Center over the past three years.

Furthermore, Han Shuping, an expert from Nanjing Maternity and Child Health Care Hospital in Nanjing in East China's Jiangsu province, explained the benefits of delayed umbilical cord ligation and extrusion, methods on performing delayed umbilical cord ligation during the resuscitation of premature infants, while sharing a large amount of literature and clinical experience.

And Zhang Huayan, an expert from the Children's Hospital of Philadelphia in the United States, looked at the controversial issues such as intra-atrial noninvasive respiratory support, oxygen concentration, as well as the use of pulmonary surfactant.

The online meeting gathered experts from obstetrics and neonatology. Peers -- from different provinces, cities, regions and hospitals at all levels -- were able to discuss, learn and communicate with others at the forum.

The conference has promoted the sharing of high-quality resources and increased their abilities to improve maternal and infant health.