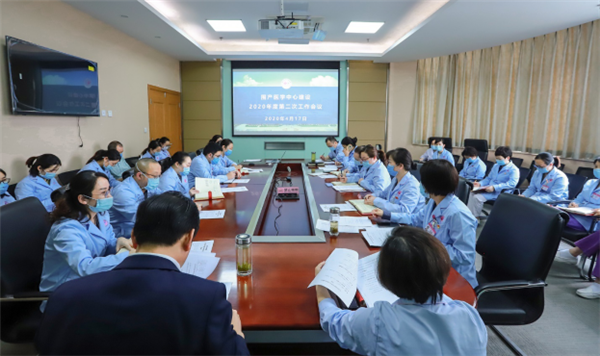 Officials from Chongqing Health Center for Women and Children and leaders of relevant departments of the hospital discuss about the operation mechanism improvement of its Perinatal Medical Center at a conference held at the hospital in Southwest China's Chongqing on April 17. [Photo provided by CQHCWC]

A working conference on the progressive construction of the Perinatal Medical Center at the Chongqing Health Center for Women and Children (CQHCWC) -- in Southwest China's Chongqing -- was held at the center on April 17, marking the second conference there this year, according to CQHCWC officials.

With the participation of CQHCWC leaders and representatives of relevant departments, 21 attendees mainly talked about improvement of the center's operations system at the conference.

At the meeting Ye Junying, chief of CQHCWC's Scientific Research and Education Section first gave a brief summary of the construction of the center in the first quarter of 2020 and analyzed the existing and pending problems in the work.

Subsequently, the leaders of key relevant departments talked about carrying out cesarean sections in the center's delivery room and discussed the existing problems in its operations, such as process specifications, staffing, treatment of high-risk maternities and premature infants.

Dan Yang, vice president of CQHCWC, proposed at the meeting that each department should optimize the staffing of center, standardize the multidisciplinary cooperation processes and effectively promote its efficient operations.

Zhang Hua, CQHCWC president, concluded that the hospital should attach great importance to the center's construction and focus on the development of an operations system, a personnel mobilization system and an external emergency allocations system -- to ensure that the center's various systems are standardized, that all work is carried out in an orderly manner and all functions are fully developed.