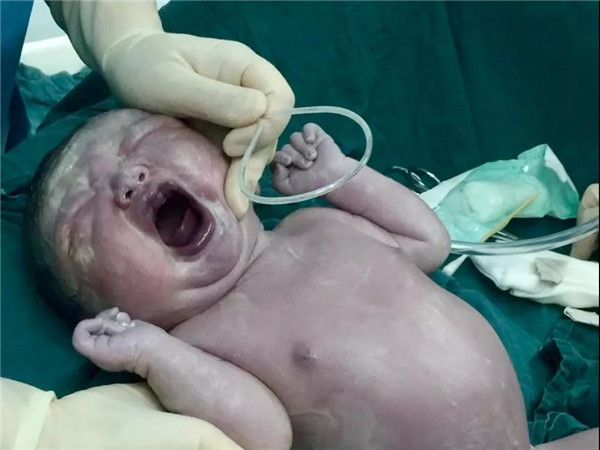 A newborn boy is successfully delivered after four hours of operation at the Perinatal Medical Center at the CQHCWC on July 1, 2019. [Photo provided by CQHCWC]

Chongqing Health Center for Women and Children -- or the CQHCWC in Southwest China's Chongqing -- received a pregnant woman with a fetus with a large pleural effusion on June 30, 2019.

The woman was at 38 weeks gestation and the color Doppler ultrasound results of her showed some worrying aspects. There was a large amount of fluid in the fetal thoracic cavity, a small amount of fluid in the abdominal cavity and her fetus' right heart was larger than the left heart, causing left and right heart asymmetry, meaning there was a possibility of death at any time.

After admission, CQHCWC carried out relevant examinations for her and doctors from the Obstetrics Department and Neonatal Department made a preliminary assessment of her condition.

On July 1, Chen Zhen, deputy director of the Obstetrics Department, initiated a prenatal multidisciplinary consultation at the Perinatal Medical Center and organized experts from all relevant departments to discuss the situation.

Given that the mother had missed the best time for prenatal diagnosis, the condition of the fetus was critical.

After discussion, medics at the center unanimously decided to terminate maternal pregnancy and conduct a cesarean section and to drain fetal pleural fluid by intrauterine puncture before the cesarean section. This would help the fetus' lungs, thereby greatly improving the success rate of a neonatal rescue.

After four hours of operation, the pregnant women delivered a boy by cesarean section smoothly, weighing 4,030 grams. After the operation, the newborn was immediately transferred to the Neonatal Department for further treatment.

Finally, the woman and her son returned healthy back at their hometown.