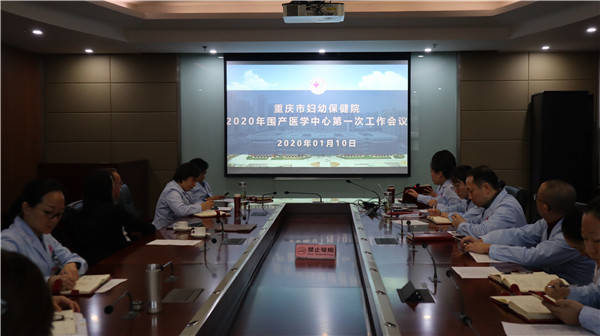 The CQHCWC holds a key meeting on the construction of its perinatal medical center on Jan 10. [Photo/CQHCWC]

Chongqing Health Center for Women and Children (CQHCWC) -- located in Southwest China's Chongqing -- held a key meeting on the construction of its Perinatal Medical Center on Jan 10, according to CQHCWC officials.

At the meeting, Ye Junying, chief of the Scientific Research and Education Section and Professor Gerhard Jorch, a German expert in perinatal medicine who is currently stationed at the CQHCWC, each presented reports on the construction of the Perinatal Medical Center in 2019.

They both examined the problems encountered last year and outlined the work plan for 2020.

Zhang Hua, the center's president, proposed that in order to build a first-class perinatal medical center, a number of things must be addressed.

He said it was important to strengthen management, carry out practical exercises, improve medical standards, improve scientific research capacity, pay attention to the combination of clinical and basic medicine and expand the academic influence of the center and the center's medical personnel.

Wang Jian, secretary of the hospital's Party Committee, stressed that the construction of the Perinatal Medical Center was the key work of the hospital in the future.

Wang said the staff of the hospital should attach great importance to the task and cooperate with each other -- striving to build a first-class perinatal medical center in China and a leading one in the West, as soon as possible

According to center officials, attendees at the meeting also discussed current problems existing in the treatment of premature infants, high-risk pregnant women and neonatal intra-hospital transport -- and put forward improvement measures at the meeting.