Professor Daniele De Luca, a renowned expert from the Neonatal Department of the Université Paris-Sud in France, visited Chongqing Health Center for Women and Children on Dec 4, according to CQHCWC officials.

As the foreign director of the project, Daniele De Luca came to CQHCWC to conduct academic exchanges and offer professional guidance.

Professor Luca is the former chairman of the Respiratory Branch of European Society of Paediatric and Neonatal Intensive Care, and is the current secretary-general of the ESPNIC. He is also the first author of the Guidelines for the Diagnosis and Treatment of Acute Respiratory Distress Syndrome in Newborns.

Officials said he visited the Neonatal Intensive Care Center and the premature infant ward, accompanied by Zhong Xiaoyun, director of the Neonatal Department.

Zhou Ligang, deputy director of the Neonatal Department, briefed the guest on the department and talked about non-invasive high-frequency ventilation applications with the visitor.

This covered four aspects -- namely the principles of NHFOV applications, the current status of NHFOV use, the advantages and characteristics of NHFOV compared with other noninvasive ventilation, and a case analysis of NHFOV for newborns.

Officials said the Neonatal Department of the CQHCWC is regarded as a critical neonatal rescue center by the local government.

In order to further improve the level of neonatal treatment and scientific research, the department has strengthened its cooperation with developed countries in medicine in recent years.

It invited Professor Joch -- chairman of the German Interdisciplinary Association of Critical Care Medicine and president of the Children's Hospital of Affiliated Hospital of the University of Magdeburg in Germany – to be its resident professor. 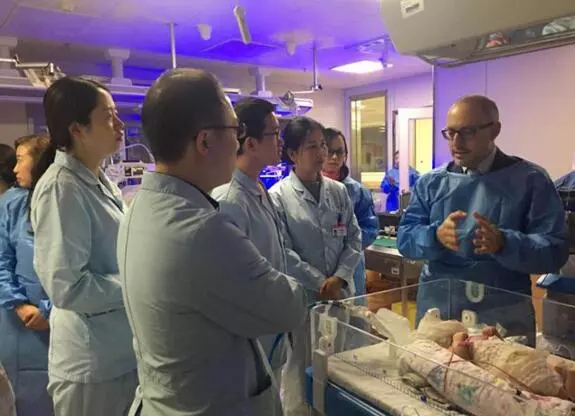 Professor Daniele De Luca (1st, right), a renowned expert from the Neonatal Department of the Université Paris-Sud in France, gives a special lecture at the CQHCWC on Dec 4. [Photo by Chongqing Health Center for Women and Children]