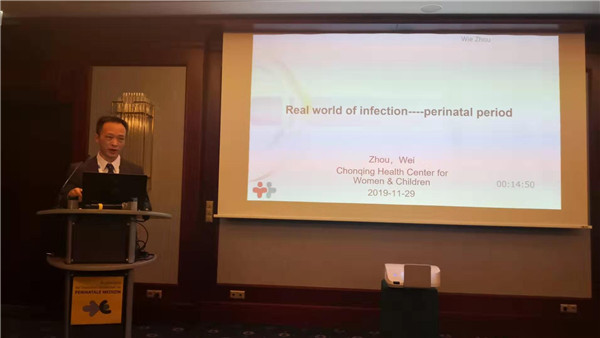 Zhou Wei makes a speech at the event. [Photo by Chongqing Health Center for Women and Children]

The 29th German Congress of Perinatal Medicine was held in the Berlin, capital of Germany, from Nov 28 to 30, 2019. Yang Longbo, director of the medical department, Zhou Wei, director of the obstetrics department, Chen Ya, head nurse of the obstetrics department, He Yang, head nurse of the operating room, and Wu Yan, deputy chief physician of the neonatal department of Chongqing Health Center for Women and Children (CQHCWC) attended the event, at the invitation of the President of the German Congress of Perinatal Medicine.

At a special forum on International Perinatal Medicine, Zhou made a speech entitled "Real world of infection: perinatal period", and experts introduced the current status of perinatal medicine in Africa, the UK, South Korea, Laos, etc. Later, Zhou took the example of pregnant women and newborns in Chongqing, and introduced the harm incurred by perinatal infection. He also summarized the results of bacterial cultures and drug sensitivity testing on more than 1,000 pregnant women with prenatal infection and more than 200 with postnatal infection, and recommended treatments. 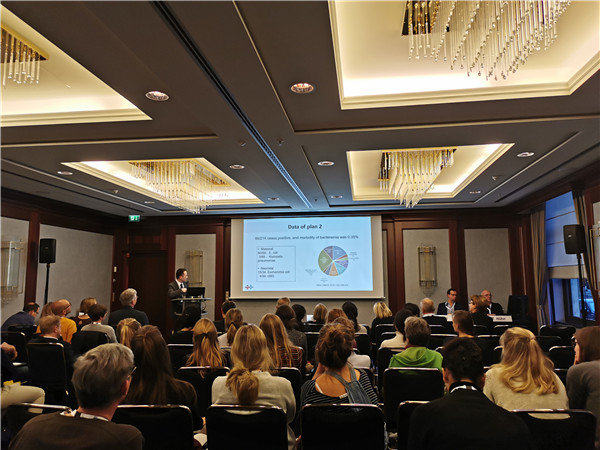 The 29th German Congress of Perinatal Medicine is held in the Berlin, capital of Germany, from Nov 28 to 30, 2019. [Photo by Chongqing Health Center for Women and Children]

In addition, Zhou introduced German and other European countries' perinatal medicine experts to the development of perinatal medicine in Chongqing, especially at CQHCWC. After the event, Zhou discussed with the experts how to improve GBS screening and reduce the cesarean section rate in China, and once again showed the hospital's progress in recent years in perinatal management.