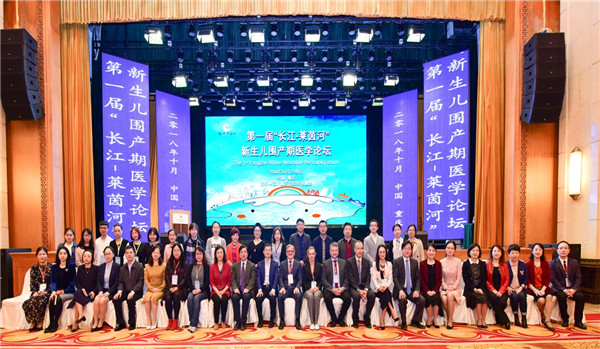 The First Yangtze-Rhine Neonatal-Perinatal Forum is held at the Chongqing Health Center for Women and Children. [Photo/CQHCWC]

The First Yangtze-Rhine Neonatal-Perinatal Forum -- as well a comprehensive management training course for ultra and very low birthweight infants -- was held at the Chongqing Health Center for Women and Children in Southwest China's Chongqing on Oct 18, 2018, according to CQHCWC officials.

Sponsored by the CQHCWC, the forum attracted the participation of over 300 leaders, experts and trainees from over 100 medical institutions and scientific research institutions in Germany, Switzerland and China.

At the opening ceremony of the forum, Wu Lianghe, deputy director of the Chongqing Municipal Health Commission, welcomed and thanked the attending experts from at home and abroad.

At the same time, he expressed his hopes that the CQHCWC would take the opportunity of establishing a German standard Class I -- the highest level -- perinatal medical center, to strengthen international cooperation and personnel training and provide more high-quality health care services for women and children.

Zhang Hua, CQHCWC president, presented a briefing on the construction progress of the hospital's Perinatal Medical Center -- and expressed his hopes that the forum would be a platform for academic exchanges between domestic and foreign counterparts in perinatal medicine, to jointly promote the progress and innovation of neonatal medicine.

At the same time, a training course on neonatal resuscitation and LISA technology was set up to present the latest in international concepts and practical operation opportunities for participants.